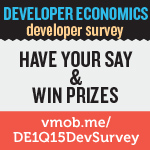 Developer Economics is VisionMobile’s leading research program, tracking global trends on the app economy and mobile developers. The program is based on the largest, most global developer surveys, run by VisionMobile every six months. The surveys track the most important metrics for mobile developers, including platform mindshare, app categories and tools, revenues and revenue models – and many more. The key findings from each survey are published in the form of freely available is xanax an over the counter drug research reports.
VisionMobile has just launched a new Developer Economics survey, aimed at mobile and IoT developers. We’d like to invite you to take part in this 10-minute survey and contribute to this freely available knowledge base, just click here. Respondents can also enter a draw for some cool prizes, including handsets and some cool gadgets.  The key findings from the survey will become available as a free research report in February 2015.