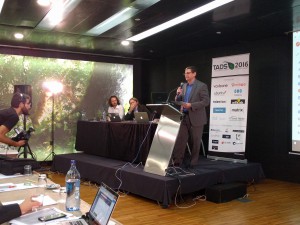 The Dangerous Demo has become a regular feature of TADHack and TADSummit. It shows to the industry what is actually possible at scale using a range of off-the shelf, open source, and new technologies. If you want to see the latest in network and service infrastructure 6-24 months before any other event, this stream delivers.

We show how powerful the sponsors’ technologies are to realize a number of world-first demo running across multiple live networks, with nothing more than configuration in a hybrid cloud environment.

James Body of Truphone kicked off the Dangerous Demo, explaining its evolution from IMS in Minutes hack at TADHack 2014, through TADSummit 2014 in Istanbul, to today with the biggest and most dangerous set of demos attempted so far.

The infrastructure was a mix of hybrid cloud and mobile edge computing.

Nancy Colwell of Telestax and Tom Ngo of Lumin.ai demoed a Bank Customer scenario showing AI assisted customer interactions using SMS to Cisco Spark, SMS to Slack, and Facebook to WebRTC based video. This demo worked perfectly in all the practice sessions. But such hiccups are why its called Dangerous Demo. But it shows the power of blending of machine learning and multi-channel communications.

We then had a Small Cells demo from Lime Micro with Jimmy Chin, showing how their LimeSDR can support network based services, and we had a few LTE networks running on band 5 in the room and were able to roam between them and use ViLTE (Video over LTE) over them. Its amazing the price reduction and functionality increase in femto and pico basestations. James drops a heavy hint on the important role of a neutral host between all these private and public networks.

Michael Lazar of DataArt demoed the IXIA Test Sequence, showed in a hybrid cloud environment how IMS have be spun up and tested. Tools to test at scale are available off the shelf. This shows how services can move from concept to realization, through testing and into deployment in hours.

We tried, but failed to have a reoccurrence of Terrorist Alert as a mystery masked man (Dean Bubley) popped in, as we said at the start it was the most dangerous demo yet 😉

Daniel Mierla had Kamailio (SIP server) running on the Ubuntu phone and was doing some heavy load testing with the audience.

Matthew Hodgson was setting up a Matrix server on an Ubuntu phone.

Maarten Ectors judged, and all the hacks got to keep their Ubuntu phones!

Sam Machin of Nexmo squeezed in a nice demo of the Watson (websockets) / Telephony (SIP) connector Nexmo has created. Which enables all the smarts of Watson can be added into calls. Sam showed a cool demo streaming voice onto a webpage using websockets and web audio.

For next year we’re going to move the Dangerous Demo into the main plenary session as the break-out streams suffered given the attention drawn to the demos. The content the other streams was excellent by the way. We’re also expanding the demo into 2 sessions: an Innovation Showcase (world-first showcases that are ready to go into deployment) and a Dangerous Demo (hacking and doing amazing stuff you see here).

I would like to highlight the amazing job the camera crew did in recording the Dangerous Demo. They were just reacting as the demo unfolded, they had no script, no clue what James Body would do next. So the video you see is all live edited between all the cameras and audio feeds, amazing!