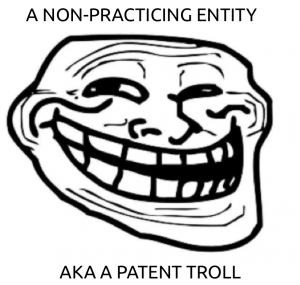 For those of us who are in the business of building things.  Where “things” are primarily apps and services. Of course, telecommunications APIs now offer a ready base from which to form or realise our visions. Being able to use networks and network resources as programmable entities, rather than as simply accessible services, opens up a world of possibilities to innovate, experiment with and ultimately commercialise ideas that 5 years ago might have otherwise languished on a whiteboard.

There’s a variety of definitions of the word innovation, but each incorporates the creation of “value”; this identifies with a core objective for software innovators, which is of course to build things that can add, or create value for our users. And of course, through doing so, we somehow – and ideally – create commercial value for ourselves.

Unfortunately, service innovators have enemies. Colloquially we know them as “patent trolls”, non-practicing entities that own patents (IPR).  And while they are active in many fields of innovation, they provide specifically vivid enough challenges to service innovators to warrant a standalone Work Stream at the TAD Summit in Istanbul.

An all-too-common scenario – and it’s one many small companies know well – goes like this. You develop an app or service idea, maybe creating a quick proof-of-concept or pilot, and you’re then able to gain support or sponsorship from a customer, a carrier, or your management to allow you to develop and launch it as a commercial service. And first there’s uptake, then there’s traction, and everyone either breathes a sigh of relief or celebrates the commercial success. You then move to ROI analysis, iterative or incremental enhancement, and on to possibly bigger, brighter things. Until the patent trolls arrive.

They first appear innocuously, maybe first as page views on your company website, or curious incoming e-mails, and then THE LETTER arrives. Always on law firm letterhead, and citing both obscure and – on first glance – utterly irrelevant or significantly aged patent where can i get valium without a prescription filings, oxygen seems to escape the room when you realise that the financial demand they make both dwarfs your annual profits AND indeed your net worth.

Patent trolls use the luxury of legal-speak to describe – in the broadest possible terms – any possible derivation encompassing whatever remote idea they once put to paper. Unlike you, they’re packing the backing of a litigation funder – a form of financial support that makes the most rapacious venture capitalists look like kittens – and they never have to build, support, and manage a damn thing. Their “idea” never even has to work – they just have to convince a patent office to approve an abstract document.

Sure, you can fight – Apple did, when they took on and ultimately settled with the party with ownership of the infamous visual voicemail patent. But Apple has billions of dollars and an army of lawyers. Do you?

Workstream 3, Managing Intellectual Property Rights (IPR) for Service Innovation, at TAD Summit will be a must-attend session for anyone managing the service innovation process. We’ll present case studies of actual Intellectual property disputes, and discuss various mechanisms that companies large and small can use to mitigate the risks of troll attacks.

Some areas for discussion within the Workstream will include:

We will also hear about initiatives such as the Open Invention Network, which has a community of almost 1,000 companies and projects that pledge never to use patents aggressively over Linux System technology.

There’s many developers and innovators reading this blog; this post kicks off the discussion process. What are some of the topics or areas you think are key for managing intellectual property rights within the context of service creation? Leave a comment below, and let’s get the ball rolling.

See you in Istanbul in November!