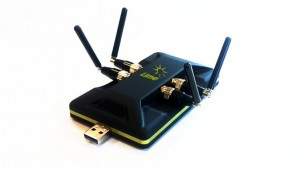 We’re exciting that Lime Microsystems will be taking part in TADSummit in November and TADHack Global in October. This UK startup developed a fully programmable RF transceiver chip, now in its second generation, which works across frequencies from 100kHz to 3.8GHz.

LimeSDR is a low cost, open source, apps-enabled software defined radio (SDR) platform that can be used to support just about any type of wireless communication standard. LimeSDR can send and receive UMTS, LTE, GSM, LoRa, Bluetooth, Zigbee, RFID, and Digital Broadcasting, to name but a few.

The LimeSDR platform gives students, inventors, and developers an intelligent and flexible device for manipulating wireless signals, so they can learn, experiment, and develop with freedom from limited functionality and expensive proprietary devices. Lime has democratized a critical part of telecoms networks.

Lime works closely with the open source community, building basestations, access points and repeaters serving areas overlooked and underserved in the developing world. They launched MyriadRF.org as a focal point for Open Source RF design to stimulate innovation and accessibility.

The platform hardware design is also open source, so anybody could design and build their own board if they wanted to. Even the firmware code loaded into the FPGA is also public, so users can change or resynthesize the design and function if they were so inclined. Most users want a ready built platform, so a standard set of software klonopin buy online with APIs is provided as a starting point.

Lime have a Crowdfunding project active until 21st June, check it out and back it if you can. This aims to raise funds to build around 2000 boards for delivery in November. At $249 ($499 including antennas and case), it’s within reach of many developers. UK network EE has bought corporate sponsorship, for which 100 boards will be donated to educational institutions throughout the country. Check out all the backers, its an impressive list.

With Canonical they are introducing a network app store with software modules than run on the platform. Canonical has created a stripped down variant of the Ubuntu operating system called Snappy, designed to run securely on autonomous machines and other IoT devices. The network app store could offer an IoT gateway, or a Zigbee network, or a NAS (Network Attached Storage), or a reverse-proxy firewall, the network apps are endless. At TADHack Global you will be able to hack on this and Snappy to try out your ideas, while at TADSummit the impact of LimeSDR and the network app store will be explained.

TADHack focused on technology, creativity and developers, while TADSummit focused on the business opportunities and strategic impact of the democratization of telecom networks and services.

Check out the LimeSDR Crowdsourcing project, the potential is amazing!